Posted on December 24, 2014 by lostspherespublishing 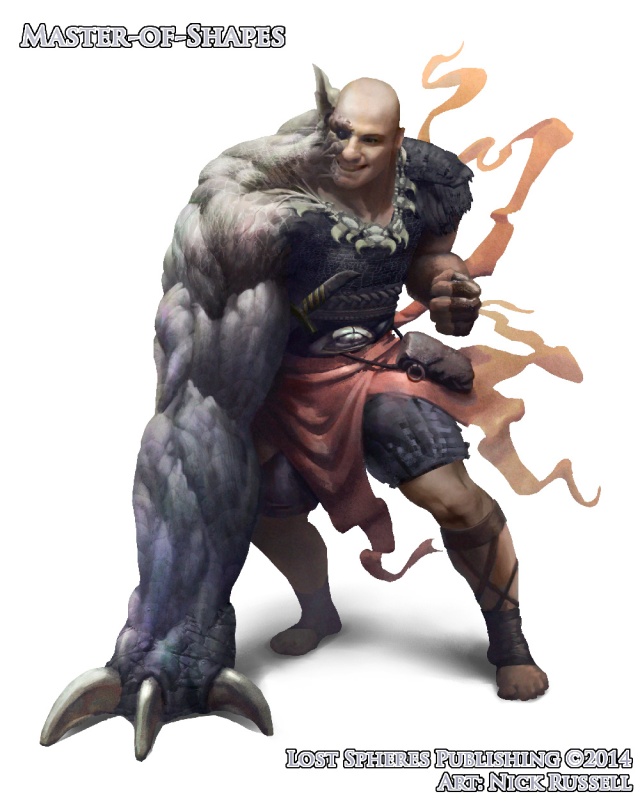 We here at Lost Spheres love shapeshifters.  Conceptually, the group of characters that encompases the ability to take on another form is pretty broad particularly including third-party options. With so many choices out there we thought some of you wouldn’t mind a few suggestions for your next morphic champion. Rogue Genius’ godling class is a versatile thing, and relatively simple to convert to a shapeshifter supreme. Over the next couple  days we’d like to showcase a few different ‘shifter character concepts from third party companies for those looking for a little change before the new year.  Welcome to the 12 days of Shift-mas!

So for comparisson’s sake we stack godling vs. druids as our shapeshifting benchmark we want to call out specifically which godling sub-class we will use. While mighty and clever godlings can take the shapeshifter I-IV traits to be a passable shifter, a mystic or adept godling can add spell resources to that that will likely make a superior shifter. So purposes of Shift-Mas mystic godling it is:

Under the Tree – One Shiny Package among many. Like druid, mystic godling shapeshifting is likely to only be a part of your toolbox unless you want to go bigger. Looking at transmuter it is possible to go:

* Spellcasting – Selecting sorcerer/wizard or even the animal domain list allows you to have a shapeshift of nearly every spell slot level.

Reaching into the godling features we add:

*  Domain Powers – dragon sub-domain and other domain powers can add breath weapons and other other creature powers to round out forms.

Battery Life – Music box. How long does our shift last? 1 minute per level for most effects. So, compared to our druid, our mystic godling isn’t likely to have a ton of staying power but with the possibility of multiple shift pools of spells, traits and domains you can stack daily uses like crazy.

Wrapping Fees –  Ka-Ching. Extend Spell is a likely must and godling feats abound to make this shifter more and more awesome. You won’t have enough for everything, you just won’t and that is awesome because you have a concept you can visit again if needed. Awesome and high replay value.

Under the Mistletoe – Gold band. How committed should a mystic godling be to her class progression for shapeshifting? Every level adds duration, uses and new shift options. Never stop. Ever.

Comeback tomorrow for the next Present of Shift-mas! Day 1 – The Bio-Mancer. Don’t forget ANY shapeshifter can benefit in Mythic games from the Master-of-Shapes path from Mythic Paths of the Lost Spheres and you can get it on: RPGNow or Paizo or d20.pfsrd.com!